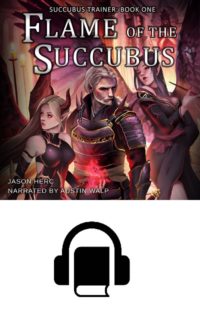 Flame of the Succubus is now available as an AUDIOBOOK narrated by Austin Walp. 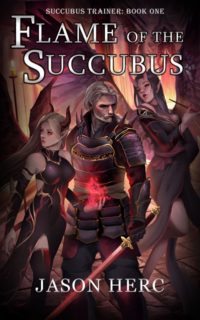 Jason Herc’s first book is now live on Amazon. Free for Kindle Unlimited subscribers. CLICK HERE to get it!

Even Hell needs a hero.

Aidan Ward works security at a mental institution, but sometimes he thinks he should have been on the other side of the cells. Ever since he was young, a strange voice has whispered to him. A voice that grows loudest in times of rage.

After an encounter with a beautiful stranger, Aidan finds himself in the Abyss, a hellish landscape filled with lost souls, demons, and nightmarish beasts. But the most powerful beings in this infernal plane are Seekers, preternatural warriors who harness their inner Flame to become gods and godslayers. Reigning above them all is the Obsidian Emperor.

To survive in the Abyss, Aidan must become a Seeker. Yet his body is cursed, his channels of Flame permanently blocked by an ancient legacy. When a young succubus tries to slay him, Aidan discovers a spiritual affinity for her instead, a gift of that same heritage. By joining with her in body and spirit, Aidan creates his own path to power.

But Aidan’s arrival has not gone unnoticed. Those who would challenge the Obsidian Emperor believe that Aidan’s ancestry is the key to victory. For the Obsidian Emperor, fearing a portent of his doom, has issued a decree that threatens the very fabric of the planes. Some will hunt him. Others will covet him. Danger will follow him, wherever he goes.

Master. Savior. Ruler. The Path of the Flame leads down many roads. But first, Aidan must cultivate the inner power fueling himself and his demonic bonds before the rising threats overwhelm them. And through it all, the dark voice in Aidan’s heart grows louder and louder…

Flame of the Succubus marries elements of xianxia, dark fantasy, western mythology, and video games. The reader should expect explicit scenes and a heavier tone that matches the growth of a succubus harem in a hellish setting. Co-cultivation of Aidan and his succubi is also integral to the progression fantasy elements. You have been warned.

Marco Frazetta, author of the Wolf Blade series, is an up and coming HaremLit author who has graciously agreed to an interview. Hope you enjoy it!

Can you tell us a little about your background? How did you get started writing stories?

I actually grew up drawing a lot more than writing. In fact, I majored in visual in art in college, hoping to be a concept artist in video games. However, that changed because my school was geared a lot more toward fine art, and also because about halfway through I injured my arms and hands severely, so drawing and painting became very painful. I’d always been a good writer, so I started exploring creative writing since art became closed off. I fell in love with it!

What drew you to the harem genre? What do you enjoy the most about this genre?

The harem genre has been a way to slip in what are essentially romance book elements into very action oriented books. I’m a sucker for a good romance, but also love good action movies like John Wick, Conan, Ninja Scroll, so it really is the best of both worlds for me.
Also, harem is just about every guy’s fantasy. There is a central character with awesome powers, powerful enemies to overcome as well as several beautiful, usually powerful female characters who help in in all sorts of ways.

How did you get the idea for your Wolf Blade series?

Growing up I played a tabletop RPG called Werewolf the Apocalypse. My character was a viking sort of character with a magic hammer like Thor’s (hey, I was in high school, not exactly the most original artist in the world). His name was Ram Fortinbrass, and he essentially went around fighting demons (in Werewolf they’re called the Wyrm) with his pack of fellow werewolves. The werewolf RPG is set in modern times and is designed to feel more like Underworld or an eco-terrorist sort of campaign against corrupt governments trying to destroy Gaia, the spirit of the world, but my group of friends would always end up turning it into more of a sword and sorcery campaign. So when I set out to write my own book, this werewolf sword and sorcery character was kicking around in my subconscious.

What’s the main character like? What should readers expect?

I’ll let a reader describe him: “Wolf Blade is Conan, meets a dash of Thundarr, with a little Bionic Commando on Steroids.”
I got a kick out of that description. The main character in the series is Rothan son of Gustaff. He hails from the land of Skald, which is norse kind of realm similar to Skyrim or The North in Game of Thrones. They recently lost a war to the southern empire, which is Roman inspired. In that war, Rothan was captured and set to fight in a coliseum. The story begins as he is set to fight in his last public bout, as his father has negotiated for his release. However, he will have to leave the concubine he won in a gladiator combat, and so he strikes a deal with the owner of the coliseum, that if he can slay a mighty creature called the Black Orc in gladiator combat, he gets his freedom as well as hers. Essentially, Rothan is a barbarian, but rather cunning. Once he develops his werewolf powers, he has to delve more into the mystical realm since these powers are given to him by the wolf god Fenris.

Favorite books (both inside and outside the harem genre).

What do you love most about writing?

Once you really get into a draft, it’s essentially a psychedelic experience, like a trance state where you begin immersing entirely into another reality.

What’s the hardest part about writing?

Outlining, plotting. This is done with more of the rational, logical side of the mind, so not as fun.

Yes, I just released a new series called Dungeons & Gangsters! You can check it out HERE. The short pitch is “Grand Theft Auto meets Skyrim.” 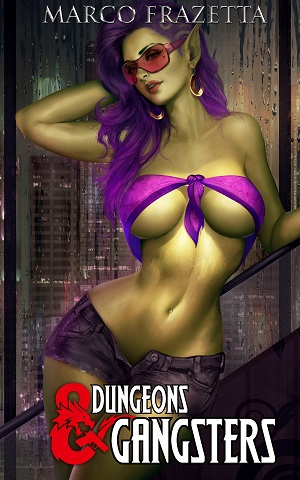 Just to say thank you, as you all allow us to do what we love! And thanks to you, Nick, for reaching out to a larger audience!

And thank you, Marco! 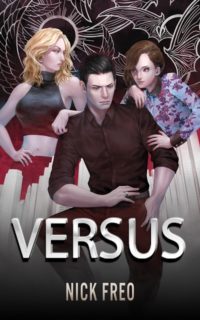 Nick’s second book is now live on Amazon. Free for Kindle Unlimited subscribers. CLICK HERE to get it!

Red pill or blue pill? Neo had it easy.

Which would you choose:

A classy sweetheart to treat you like a king, or a lusty babe to rock your world.

The gift of healing to ease your pain, or the power of hellfire to dish it out.

Or do you have the will to keep it all?

When his father is murdered, Kyle Bishop inherits the mantle of the Arbiter, humanity’s last hope of survival in the eternal war between Heaven and Hell.

The Celestial Court appoints two chaperones, a female angel and a female demon, to protect the young Arbiter from otherworldly threats. Or so they claim.

While his death would clear the path to unfettered war, swaying him to one faction or the other would guarantee that side’s eventual victory. Kyle is soon caught in a deadly game of seduction that could tear him apart. Literally.

But Kyle isn’t anyone’s fool. As he retraces the events leading to his father’s death, Kyle begins to uncover the lost legacy of the Arbiters. With his newfound powers and allies, Kyle must combat traitorous schemes from within the Court itself, while still maintaining the balance between Heaven and Hell. For an Arbiter’s true strength arises from the very choices he makes.

This alignment-based light GameLit is inspired in part by Good Omens, Fable, and a reality TV show I will never admit to watching. This book contains adult and harem themes. 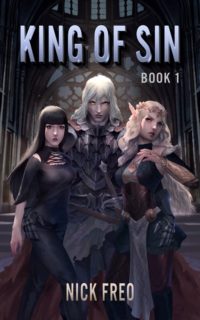 Nick’s first book is now live on Amazon. Free for Kindle Unlimited subscribers. CLICK HERE to get it!

A fallen Dark Lord. A second chance… for vengeance.

When Cain awakens after a great battle, he finds himself in the modern age of man, all traces of his former kingdom gone. But this new world is soft, ripe for the taking. With his only remaining ally, the elf-queen Pride, Cain sets out to conquer all that he sees.

But the world is not as defenseless as it first appears, and Cain will have to contend with powers, old and new, who stand is his path. When might and magic are not enough, Cain adapts to this strange new world, gaining allies and resources to once again become the true King of Sin.